Deva Premal and Miten with Manose and the Temple Band 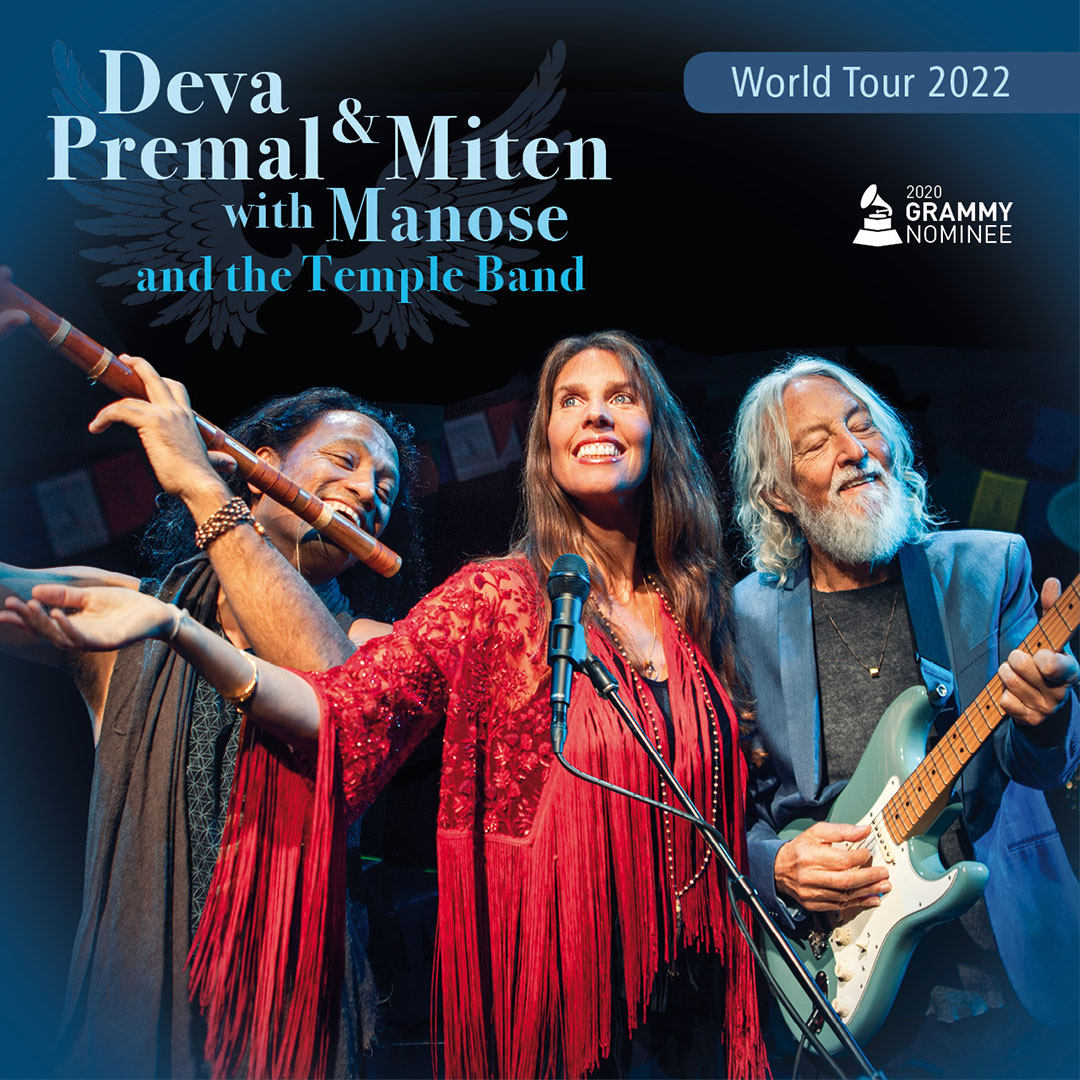 Cher: “The Essence by Deva Premal is my all-time favourite album for yoga.”

HH Dalai Lama (after Deva & Miten played for him at a private audience): “Beautiful, beautiful music.”

Krishna Das: “Temple at Midnight is a wondrous musical journey to Love. We have no fear. Our path is illuminated by each song, glowing with a different coloured light, showing us the way home.”

Deva Premal & Miten celebrate 30 years of love, life and music as they embark on their World Tour 2020, alongside Nepalese bansuri maestro Manose and accompanied by their great Temple Band (Joby Baker, Spencer Cozens and Miles Bould).

In the year that Deva Premal is nominated for a Grammy award for her album DEVA, and Miten is winning international acclaim for his album Devotee, the couple are once again renewing their special relationship with audiences around the globe through the transcendent medium of mantra.

“It’s our 25th year of touring,” Miten says, “And we will be looking back through our catalogue and playing some pieces from those early times. Celebrating 30 years of music and a loving connection with our audience has been an incredible. We’re like family – We have grown together over the years and watched as more and more like-minded souls join the community.

The couple first met at the ashram of Osho (aka Bhagwan Shree Rajneesh) in Pune, India in 1990. She was studying shiatsu, reflexology and massage, he was in the process of transforming his life from jaded rock musician to meditator.

Both were on a quest for enlightenment. “We began to sing together in the ashram quite innocently, just feeling our way into the music and how to share what we’d learned in the ashram.” Miten recalls.

Using the gifts and disciplines of harmony and meditation they transform concert halls into sacred temples. The word “show” is hardly appropriate or adequate to describe the communal rhapsody that occurs during their events.

“There is a portal that we all go through,” Miten says. “It’s not created just by the musicians and the singers with the microphones. Every one of us is responsible for the evening proceedings and the joy that we take away with us at the end of the evening. For Deva and myself, it’s way more than entertainment, it’s a matter of life and death. Our gatherings nourish the forward motion of life.”

Led by the exquisite, telepathically-entwined harmonies of Deva and Miten, the blend of sensual and spiritual, east-meets-west music they perform at these events has attracted the attention of stars and world teachers. The Dalai Lama, who the duo played for at an exclusive gathering, is known to include their music in his private time, while Cher, an abiding fan of the duo, continues to feature a version of their Gayatri Mantra in her current shows. Meditators, yogis and spiritual misfits attend their concerts along with fans of new age, rock, trance, fusion, classical, Eastern and world music.

Meanwhile, away from the spotlight, Deva and Miten take their music to prisons (including San Quentin), homeless shelters and facilities for autistic children, places where their chanting offers a natural path to ease the heart and bring tranquillity to the troubled mind.

“Mantra chanting never fails to uplift the spirit, no matter how disconnected we may feel,” Deva says. In a world of accelerating technical complexity and constant emotional upheaval, going to a Deva Premal & Miten concert is a moment to draw breath, re-connect to a deeper purpose and apply a soothing balm to the spirit.

CHER: “The Essence by Deva Premal is my all-time favourite album for yoga.” HH DALAI LAMA (after Deva & Miten played for him at a private audience): “Beautiful, beautiful music.”

KRISHNA DAS: “Temple at Midnight is a wondrous musical journey to Love. We have no fear. Our path is illuminated by each song, glowing with a different coloured light, showing us the way home.”

CHRISTIANE NORTHRUP MD: “Deva is a beautiful musical offering to the world which simultaneously uplifts, delights and heals.”

BRUCE LIPTON PhD:  “Deva’s soul-soothing tracks provide an antidote to today’s high-stress world... a powerful prescription for joy whose side effects include enhanced health and an opportunity to reignite your passion for life.”

From MOSCOW: “It was fantastic! I have never sung together with so many people, this chanting touched me so deeply that I even cried a little. It wasn’t a concert in the common way, it was a revelation, a healing meditation where our hearts were filled with love, joy and forgiveness.”

From MUNICH: “It was a truly magical and deeply healing evening. Starting with the first OM until the break the tears ran down my cheeks like a silent waterfall. I feel a deep gratitude for you and your music. When I gave birth it was also your music that accompanied us.”

From ISRAEL: “It was magical in Tel Aviv ... something opened in me. I always saw the Arabs as my enemy... separate from them. I tried to understand but my heart was closed. After the concert I feel peace in my heart and hope for a good life for all of us. Namaste.”

The best way to experience the power of a mantra is to chant it — and even better, to chant it in community.